In the countless conversations I have had with my current as well as prospective clients, I often reference a quote that, at its core, is about change. Change, for the most part, is always available to an individual.  Whether that person (student) wants to change is an entirely up to them and it’s when and only when they finally decide that opportunity (teacher) has always been there. It’s no sur 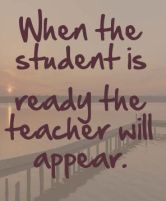 prise then when I hear people making excuses for not doing something because it’s obvious that they aren’t ready to commit to their change.  Excuses are far easier emotionally and mentally to live with and tend to prevail over actually doing whatever work is necessary to make a change.  It’s only when the individual is wholeheartedly ready and able to commit that success will be there waiting for them.

My mom is 76 years old.  Since I can remember, she has struggled with her wei

ght and as of the last few years, her health has suffered to some degree as well. For the last couple of years her habits showed no sign of a willingness to change, albeit, in her heart she wanted to.  She rationalized to herself and others about her issues and was not entirely ready to seize the opportunity that awaited her…until recently.  A doctor metaphorically “slapped her in the face” and got her attention in a very powerful way.  It was at that moment that she became the student and the teacher – who was always there – appeared to her in the most promising way.  I won’t take the time to chronicle her journey over the last several months, but I will give you the end result of her commitment and tell you how proud I am of her for taking charge of her life and sticking with something that undoubtedly had to be one of THE hardest things to do in her entire life (other than putting up with my dad for all these years).